The Parkerilla is the first live album by Graham Parker & The Rumour released to the general public from the Stick To Me tour in 1978.

It had three LP sides live and an alternative studio version of Don’t Ask Me Question on the fourth side. This made it controversial and following the disappointing Stick To Me album, there was a critical backlash against Graham Parker in favour of Elvis Costello.

In 1991, Rolling Stone ranked The Parkerilla number 64 on its list of 100 greatest album covers. 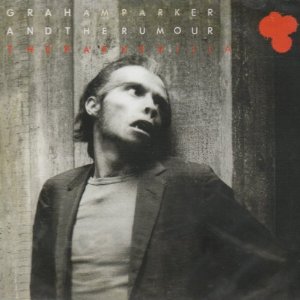 Unlike Live At Marble Arch which has 40% cover versions, The Parkerilla is made up of Graham Parker composed songs.

For some strange reason, this wasn’t the live album that Graham Parker needed after only three studio albums. Kiss did it and went huge, but The Parkerilla flopped.

Here are some videos of Graham Parker and the Rumour performing live in 1977 and 1978.

Pourin’ It All Out (not on The Parkerilla album)

Stick To Me (not on The Parkerilla album)

I’m Gonna Tear Your Playhouse Down

It isn’t mentioned on the greatest live albums ever lists and there are few reviews at Amazon.

Graham Parker was in dispute with his record company Mercury and it is said that this was rush released to complete the contract.

Music critic Robert Christgau was damning about The Parkerilla but loved the following studio album, Squeezing Out The Sparks. Rolling Stone magazine didn’t like it either.

I think it’s much better than its reputation suggests although it wouldn’t be my first choice of Graham Parker live albums.

If you want to experience the incendiary Graham Parker live show, my advice is to buy Live In San Francisco 1979.

Have You Heard The Parkerilla?

Do you think this album needs top be reappraised and think that it is unfairly criticised?