Afterlife is a live album by the Joe Jackson Band.

It was recorded at four different concerts between the 27th and 31st of August 2003.

Some versions come with a bonus disc recorded live at the Heineken Music Hall, Amsterdamon May 30th, 2003 which was broadcast on BNN radio. 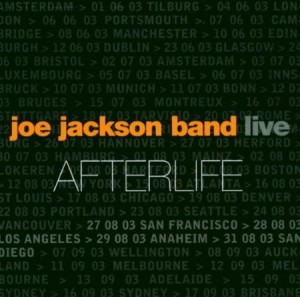 Is it the best live album by Joe Jackson? Which do you recommend?