The title Richard & Linda Thompson In Concert November 1975 describes this album perfectly. It was recorded on the Pour Down Like Silver Tour at several venues. 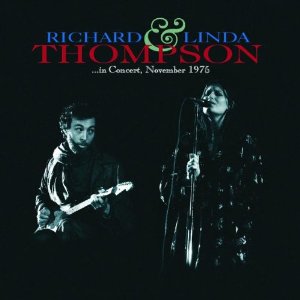 Five of the songs come from the Pour Down Like Silver album but this isn’t the album that most Richard Thompson fans would want most heavily featured.

His albums are generally acclaimed by critics and he must be bored to hear tags like the “best songwriter you’ve never heard of.” The early years with his wife Linda are dominated by two great albums – I Want to See the Bright Lights Tonight and Shoot Out The Lights.

Unfortunately, by the time the album was released, their marriage was over so we’ll never hear prime time live versions of these songs.

Here is a video of Richard and Linda performing I Want To See The Bright Lights with Fairport Convention.

A Heart Needs A Home

Jet Plane In A Rocking Chair

This Live Albums vs A Richard & Linda Thompson Compilation vs The Studio Albums?

This section looks at what you should do if you want one or two albums by Richard and Linda Thompson but you don’t want to get them all.

This live album has its place if you want three albums by the duo but I don’t believe you can look past the two studio albums that bookend their recording careers, I Want To See The Bright Lights and Shoot Out The Lights.

Both deserve to have been enormous hits but, since this is Richard Thompson, they weren’t. If I was forced to choose, I think I’d go for the first one on four days of the week and the other, the rest of the time. It really is that close.

In Concert November 1975 gives you some of the best tracks from the other albums together with some unusual items and a live version of Calvary Cross.

What Others Say About Richard & Linda Thompson In Concert

I haven’t seen it featured in any of the greatest live album ever lists.

I haven’t seen this album offered for sale by iTunes.

What Do You Think About This Richard & Linda Thompson Live Album?