Join Together is a recording of The Who performing live in 1989.

It was the first time a live version of Tommy was released although this has also subsequently appeared on an extended The Who Live At Leeds Live At Hull and Live At The Isle Of Wight Festival.

Tommy was played on this tour because the group were celebrating the 20th anniversary of the release of the original studio album. Personally I’ve never thought the songs – and especially the studio album – live up to the good reputation it has.

Prepare yourself. Join Together is a very different listening experience to the other live albums by The Who because it features brass.

I’ve heard it called “The Who Las Vegas style” but I like it. You do need an open mind and it comes as quite a shock if you’ve loved Live At Leeds and you want a similar roar in the live recordings of the later songs.

Review Of The Who Join Together – Overall Rating of 24/30 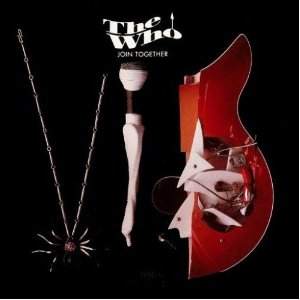 Disc one (all from the Tommy studio album)

The Who weren’t touring to promote a new album so rather than feature many of the oldies that feature on most live albums by the Who, they played a selection of Pete Townshend solo tracks along with Tommy.

I’m not crazy about the Tommy CD but I think the second CD is a really interesting mix of songs and makes a nice break from the narrow list of tunes that The Who normally play live.

By this stage Kenney Jones had left the band and the drums were played by Simon Phillips. He does a good job although he’s not Keith Moon.

Pete Townshend hurt his hand at the start of the tour and he mainly plays acoustic guitar. His lead guitar duties are performed by Steve ‘Boltz’ Bolton who used to be a member of Atomic Rooster. I think he does a good job. John Bundrick supports the sound on keyboards and piano.

The Who bring brass into their live sound which makes the album sound very different from their normal live recordings.

As far as I’m concerned it works very well and after the excellent Live At Leeds and From The Blues To The Bush, this is the album I listen to when I want The Who with a twist.

Here is The Who performing the CSI theme tune, Who Are You in 1989 in LA.

I’m giving this a performance rating of 8/10

What the album gains in the performance side because of the brass, it loses in authenticity because it sounds different. Marks are also lost for missing the sadly departed Keith Moon and The Who were well part their best by this stage and had stopped functioning as a recording group.

This is an album where my marking system feels a little stingy. I really like it but I won’t pretend that it can replace Live At Leeds or Blues To The Bush… and that’s before the great missing live album(s) from the Quadrophenia to The Who By Numbers period that are probably hiding in Pete Townshend’s vault.

I recommend Join Together if you’re prepared to be open-minded about what the group should sound like live. If you want the traditional Who sound, then it’s best to forget it.

What Do You Think About Join Together?

This is a controversial live album from The Who but what do you think?

Is it the best live album by The Who