Tony Bennett At Carnegie Hall – The Complete Concert  is a live album by Tony Bennett. 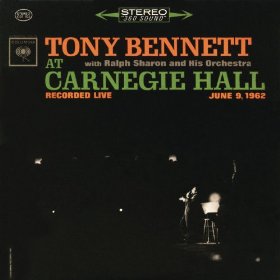 Do you think that this album is the best live album by Tony Bennett?

This album is included in the poll to find the best lounge live albums. This is my category for light jazz, easy listening and the rat pack style crooners.

Click on the links to see what other live albums were recorded in 1962.