It was recorded on their European tour in June 2013.

In recent years, VDGG have performed without David Jackson or any replacement saxophone player which inevitably changes their sound. 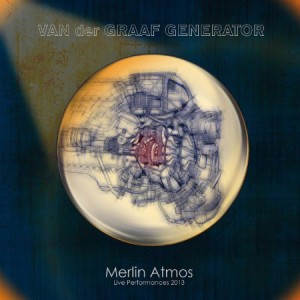 There are two versions. Officially Merlin Atmos is the first CD and the second is officially called Bonus Atmos which is available in the Deluxe Edition and the mp3 download.

It’s an interesting set list. This is the full time that the full version of the Pawn Hearts’ classic side long track A Plague of Lighthouse-Keepers has appeared on a live album. With Man-Erg as well, it means that Pawn Hearts is particularly well represented.

Of the new albums, Trisector provides the largest number of songs.

VDGG have been very active since their reunion in 2005 with both studio albums and live albums. Unlike many 1970s prog rock acts, they have continued to develop and their 21st century albums need attention.

If you read the reviews on this website, you’ll know that I love good sax playing. While I miss Jackson, I also sympathise with the view that  there is more space to appreciate both the song and the other instruments.

I thought the come-back with the live album Real Time was excellent. Since then I’ve been a little wary because VDGG are another mood group. Play their music when I’m in the right mood and it’s terrific but it comes off quickly if it doesn’t sync with me. This means that there’s space for only a limited number of Van Der Graaf Generator albums but this one tempts me.

Is it the best live album by Van Der Graaf Generator? Which do you recommend?