Blowin’ is a live album of the Jess Roden Band. It was recorded at the Birmingham Town Hall and Leicester University in November 1976.

Earlier in the year, the Jess Roden band had released a live EP with three songs – Can’t Get Next To You, On A Winner With You & You Can Leave Your Hat On.

I remember hearing this on the John Peel late night show on BBC Radio 1 and my love affair with the music of Jess Roden started. I never tracked down the EP but I bought Blowin’. 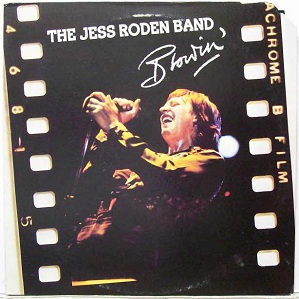 My copy of Blowin’ is on vinyl and I’ve never seen it released as a CD. All the songs are featured on the Jess Roden Live At The BBC album which was recorded at a  concert a couple of months later in January 1977. Unfortunately this is also hard to find.

Unfortunately I don’t have a turntable to play my vinyl album at the moment so I can’t make many comments.

I played it a lot. Whatever my mood, Blowin’ seemed to do the trick and made me feel better. I snapped up the CD of Live At The BBC as soon as I saw it as I was continually looking for the CD release of the first live album.

I don’t think the album has ever been released as a CD but you can find old vinyl copies.