The Duke At Fargo 1940: Special 60th Anniversary Edition is the latest version of this live recording by Duke Ellington and his orchestra.

It was recorded at the Crystal Ballroom on the second floor of the Fargo City Auditorium in Fargo, North Dakota on 7 November 1940. This captures the band in its Blanton-Webster years, often considered to be the peak period of the Duke Ellington orchestra.

Two fans, Jack Towers and Richard Burris, were given permission to record the performance using technology that transferred the sound to 15 minute long acetate covered, aluminium discs. Part of the concert was also recorded by KVOX, Fargo’s local radio station at the time.

It was only after Ellington’s death that the recording was made available commercially and it has since been released several times. 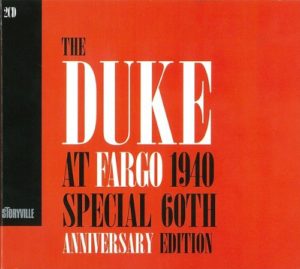