Live At My Father’s Place is a radio broadcast recording of City Boy performing on Long Island, New York in 1978 on the tour to promote Book Early.

There are five live tracks recorded by the BBC for the Radio 1 In Concert programme available as bonuses on the two-for-one off of City Boy + Dinner At The Ritz. 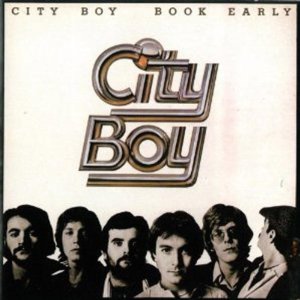 This is a nicely balanced set list with three songs from each of their first three albums, City Boy, Dinner At The Ritz and Young Men Gone West. Five songs come from the Book Early album.

The problem with City Boy is that they recorded very few bad songs. The songs from Book Early that they didn’t play at this concert are: Summer In The School Yard, Goodbye Laurelie, Raise Your Glass (To Foolish Me), Do What You Do, Do Well, Bet, Dangerous Ground.

This is a very good performance in front a crowd that is much smaller than the band deserved.

What comes over particularly well is how good the singers and harmonies of the group were – they didn’t need a studio trickery – and the guitar playing of Mike Slamer.

City Boy are proof that you don’t have to be famous to be great.

There is a City Boy forum called cityboy.org which has been supported by members of the band and they used to have a download page. It may still be there, somewhere.

I’m hoping that some label will also leap forward and make the recordings available on Amazon and iTunes.

You can get the Book Early Album from Amazon.

Do yourself a favour and get to know the music of City Boy.