The Specials BBC In Concert 15th December 1979 is a live recording by The Specials.

It was recorded by the BBC at the Paris Theatre on 15 December 1979.

These songs appear to be the same as those that appeared on combined BBC 2 Tone In Concert album by The Selector and The Specials that Discogs says was recorded at the Palace Theatre on the 5th December 1979. They may be different but it seems unlikely to me.

While Live at the Moonlight Club was released six months before their debut album was released, this was recorded a month afterwards. 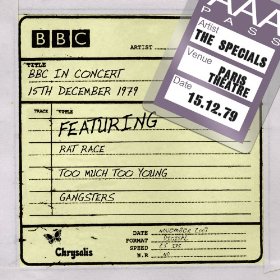 Songs On The Specials BBC In Concert 15th December 1979

The advantage this has over the Live at the Moonlight Club album is that in Gangsters and Rat Race, it has more of their big UK hit singles.

I haven”t seen any reviews (positive or negative)at Amazon to bring in but the option to hear the music samples on Amazon and iTunes means that you can check for yourself.

This is only available as a digital download as far as I can see but the combined album by The Specials and The Selecter is a CD so that might be worth looking for instead of this.