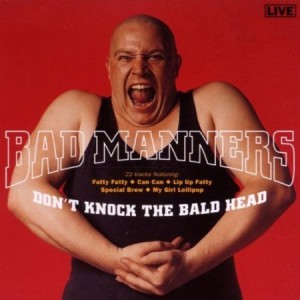 This is good time, fun ska music that’s hard to resist when you hear it. The Specials and The Beat may have been more fashionable and politically aware in the two-tone scene in the early 1980s in the UK but Buster Bloodvessel and his band know how to party.

There are a lot of compilation albums by Bad Manners but this stands up to any of them.

Bad Manners are often dominated by the larger than life character of Buster Bloodvessel and memories of him on Top Of The Pops but the band are under-rated for their music.

These links will help you get to the albums quickly and easily but I recommend that you still search for the best deal. Be careful because there is also a studio album by Bad Manners called Don’t Knock the Baldhead. Also check out Feel Like Jumping! Greatest Hits Live! which may be available at a lower cost.

Is it the best live album by Bad Manners? Which do you recommend?