BBC Radio One Live in Concert is a live album by Eddie And The Hot Rods that was recorded for the a radio broadcast.

Eddie and the Hot Rods were a group that emerged from the pub rock scene in Britain playing louder, faster and more aggressively than normal. They helped open up the market for punk rock and the Sex Pistols and The Clash.

Their earliest success was with the Live at the Marquee EP featuring a blisteringly fast version of Bob Seger’s Get Out Of Denver.

Unfortunately it didn’t do them any good. They weren’t punks but they didn’t fall into the classic rock or the emerging AOR categories either.

Eddie And The Hot Rods Live In Concert 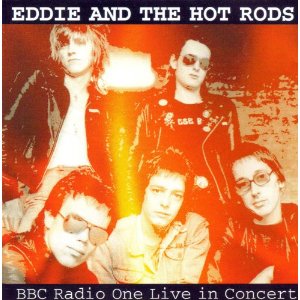 I will be back to write a much fuller review of this album. This is one band I’m eager for more people to try.

The album Life On The Line should have helped make Eddie & The Hot Rods a big success. It is a hidden treasure that should be regarded as a new wave classic but it hasn’t been available in the UK for a long time.

Eddie & The Hot Rods tear it up. They were a terrific live band and it shows on this live album.

One of the nice things about concerts that were radio broadcasts is that you know the sound is genuine and hasn’t been overdubbed to death in the studio.

What Other People Say About This Live Album

It has not appeared on any best live album lists.

Eddie & The Hot Rods aren’t being treated well by the record companies.

Is This The Best Pub Rock Live Album?

I decided that Eddie & the Hot Rods didn’t quality for the best punk live album poll but this album is nominated in the poll to find out the best pub rock live album.