Dreamboat Annie Live is a live album recording of the debut album by AOR rock group Heart. It was recorded in April 2007 and is also available as a DVD. 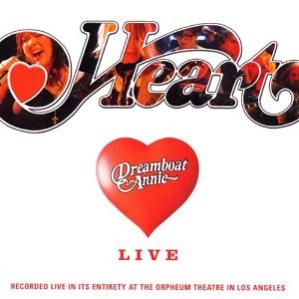 The UK release that I have includes two bonus tracks

This is a bit odd with the Dreamboat Annie songs followed by some unexpected live cover versions rather than revisiting some of Heart’s own better known later songs.

I prefer the approach taken by Primal Scream with Psychedlica. They played the album live and then brought together a short set of their other songs.

The covers are interesting initially but I fear that interest wanes over time. If you want to hear Zeppelin, Floyd or The Who, you will turn elsewhere in your album collection.

These classic albums played live are always a bit of a risk and opinions tend to vary based on the opinion of the original album and live albums in general. Some people are horrified that something can be changed or updated.

This isn’t an exact duplication of the studio album and I don’t want it to be. Ann Wilson’s voice has matured over the years and it’s huskier.

Heart have never been a critics favourite so it’s no surprise that I haven’t seen this listed on the great live albums lists.

It is appreciated at Amazon although there are some dissenting voices.

What Do You Think About Dreamboat Annie Live?

Do you think this is the best live album by Heart or do you prefer another?

Is This The Best AOR Live Album?

I have included this album in the nomination for the poll to find the very best live album by an AOR group.