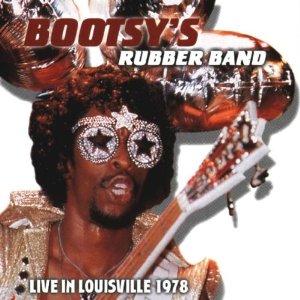 I’ll be writing a longer review.

What Other People Say About Live in Louisville 1978

I haven’t seen it in any best live albums ever lists but very little funk (with the exception of James Brown) is included.

Reviews at Amazon are very positive.

What Do You Think About Live In Louisville?

Do you think this is the best live album by Bootsy Collins outside of his time with James Brown and P-Funk?

What Are The Best Funk Live Albums Ever?

Bootsy’s Rubber Band Live In Louisville 1978 has been nominated in my readers poll to find the very best live funk album.

Please click on the link and vote for the albums you think deserve to be considered the very best.