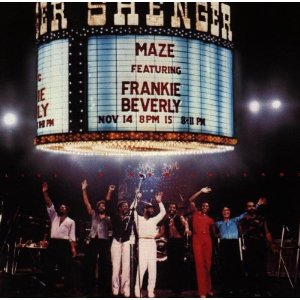 Unlike many live albums that have been extended when reissued, Live In New Orleans was cut down from 13 to 10 tracks when it moved to CD.The tracks that were taken away were the Introduction, You and Happy Feelings.

Four of the six tracks come from their 1980 album Joy and Pain.

The six live tracks are terrific. The four from the studio are excellent as well making Live In New Orleans a great soulful funk (or funky soul) album to listen to. There is so much to enjoy when it’s playing.

Frankie Beverly has a great voice. Much more Marvin Gaye than Wilson Pickett.

Instrumentally the band are tight and there are frequent instrumental breaks where Maze show how they can get into the groove.

In my opinion Maze are another of those bands that benefit from being recorded live because the studio recordings get too smooth. They lose the soul and passion you want to hear.

The transition isn’t too bad on this album although I’d have preferred the new songs to be recorded in concert.

Here is a video of Maze performing Feel That You’re Feeling live in 1980.

My rating system is going to give me problems here.

I don’t like the live plus studio combination.There isn’t a sudden jolt in sound but you’ll notice the lack of the live spark.

I hate the fact that the concert introduction and two live songs have been sacrificed to fit the album on a single CD. However if I think back to the original double album, I’d rather have three LP sides of Maze live than for the record to have been released as a single live album.

Make no mistake, this is a great album to listen to and if you enjoy seventies style soul and funk, I recommend it highly.

But is it a great live album?

Four of the ten tracks are studio recordings and instead of being extended on reissue as you’d hope, the album has been butchered.

In terms of listening please, I could make an argument for ranking it higher than 25/30. The way Frankie Beverly and the record company have treated this album and the Maze fans, means there are no bonus points.

Live In New Orleans could have been exceptional and a must buy for soul and funk fans.

Instead it’s a very good nice to have.

This should change if the album is properly reissued. Perhaps there are even some extra tracks.

What Others Say About Live In New Orleans

Again it’s missing from the big lists of greatest live albums. I’m surprised but perhaps the studio tracks are a problem.

Reviews are very positive on Amazon.com for the music but critical about the way it has been cut down.

You can buy the album from Amazon.com – or Amazon.co.uk – iTunes – eBay

Do you think this live album is better than the follow up, Maze Live In Los Angeles?

How Does This Rate As One Of  The Best Live Albums?

Maze sit between soul and funk so I have included this album in both the funk and soul best album polls.