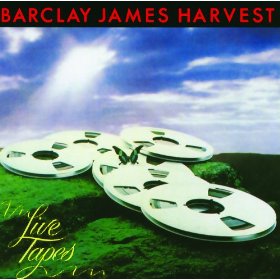 This is a very nicely put-together set list from Barclay James Harvest’s best albums featuring their style of mellotron based symphonic prog rock.

The World Goes On, Medicine Man and Hymn For The Children were added to Live Tapes when it was remastered in 2009 but they are not on my version.

It’s difficult to ignore the similarities with The Moody Blues but they never matched their success in the UK and United States. In many ways BJH were more likeable.

Their sound isn’t as original as Genesis, Yes or Pink Floyd so I’ve resisted the temptation to give the set list 9/10. There is a lot to enjoy if you like melodic progressive rock and I might be back to upgrade it..However There isn’t a track as great as Supper’s Ready, Close To The Edge or Shine On You Crazy Diamond on here to demand that you give it a regular play.

Personally live is the way I want to hear Barclay James Harvest. I’ve always felt that their studio albums felt subdued and over-produced.

The group didn’t have a powerful and distinctive singer like Peter Gabriel, Greg lake or Jon Anderson and relied on pleasant voices like Floyd. The vocals sound stronger live.

Also stronger and more insistent is the guitar from John Lees that surges and slashes above the keyboards of Woolly Wolstenholme.

Videos of Barclay James Harvest from around the period.

Rock ‘n’ Roll Star in the studio, probably miming because it’s a shadow of the version on Live Tapes.

Child Of The Universe – from 1980 and the Berlin concert but it’s the opening track to Live tapes and it gives you a better idea.

Hymn also from the Berlin concert in 1980

This is an area where prog rock live albums will always suffer in comparison to more dynamic forms of music like soul, funk and heavy metal.

The audience used to sit and politely listen to the music while watching the band and light show. The most exciting bit was when the cigarette lighters cam out at the end.

However it was an event to see complex music played well, a bit like watching a classical orchestra perform a symphony. This is going to sound strange but I also think that Barclay James Harvest were surprisingly soulful.

Live Tapes is a very good album and my first choice when I want to hear Barclay James Harvest.

I can’t pretend that it’s essential listening for the average rock fan but if you enjoy the symphonic progressive rock of early Genesis on albums like Genesis Live and Seconds Out, I think you will like Live Tapes.

What Others Say About Live Tapes

From what I remember, it wasn’t even fashionable to like Barclay James Harvest in the mid seventies so it won’t surprise you to know that I haven’t seen this album on any of the best live album lists.

Feedback on Amazon is positive.

What Are the Best Live albums Of All Time?

This album is nominated in these readers polls

How do you think it ranks?