Real To Reel is a live album by prog rock group Marillion.

An extra song, Emerald Lies was added to the CD release. It is often sold with the Brief Encounters part-live EP added to it as a bonus.

There is some confusion as to the source of the three live tracks on the Brief Encounters EP. It says that it was recorded at the Hammersmith Odeon on January 9&10, 1986 but Fish can be heard to say “Leicester Goodnight” at the end of Fugazi. According to Wikipedia, both Fugazi and Script For a Jester’s Tear are likely to come from the same
Leicester concert in 1984 that features on the Real To Reel live album. 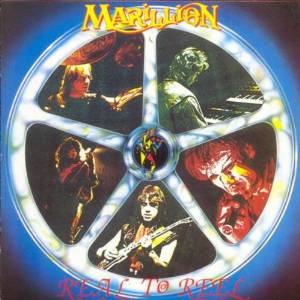 There is also a Japanese reissue with even more – Charting the Single (6:37) and Margaret (12:22) were recorded at the Edinburgh Playhouse in Scotland on 7 April 1983.

Mick Pointer played drums on the 1983 tracks included in the Japanese version.

I’ve probably spent more than 30 years dismissing Marillion as Gabriel era Genesis clones. The group can be commended for bringing prog to the singles charts but they were about 10 years too late to catch the main interest in prog rock.

Do you think this album is the best live album by Marillion?