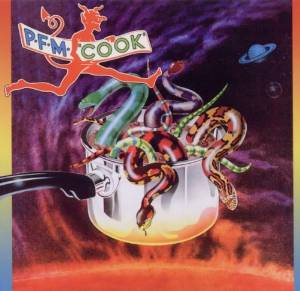 Earlier in 1974 Djivas had replaced their original bassist Giorgio Piazza but all the others are founder members of PFM.

PFM play symphonic progressive rock and are a cross between Genesis and Yes.

Over on ProgArchives.com the album is given a rating of 4.13 from 134 people. To put that into context, 49% say it is an “Excellent addition to any prog rock music collection” while 38% say “Essential: a masterpiece of progressive rock music”.

It really is that good if you’re prepared to dabble with prog rock that isn’t all in English. PFM have since then recorded and released a lot of live albums but I think this is a terrific place to start and it’s been made even better with the addition of the New York concert.

I’m expecting to finish with a review rating close to Yessongs and Seconds Out.

Is this the best live album by PFM? Why?

I have included this album in my search for the best prog rock live album.

I believe this album would do really well if more people knew about it.