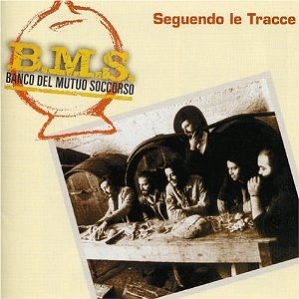 If you’ve wanted to hear Banco live from when they wee young, this is the album to get. later in the seventies they changed their sound to try to incorporate a disco beat. prog disco, the mind shudders.

The following were members of Banco del Mutuo Soccorso

Here is the 2012 version of Banco performing one of the songs from this album, RIP. I don’t like to jump 30 to 40 years like this but there aren’t many videos of Banco Del Mutuo Soccorco on YouTube.

What Other People Say About Seguendo Le Tracce

The British music press have been reluctant to show much interest in the Italian prog rock scene and I suspect a similar situation with the American press. I haven’t seen this in any great live albums lists. It didn’t help by taking 30 years to release the recordings.

If you love prog rock and you want to explore what was happening outside the British big prog rock groups of the 1970s with Pink Floyd, Yes, Genesis, King Crimson, Van Der Graaf Generator and similar bands, then I recommend you spend time with the big Italian groups like Banco and PFM.

What Do You Think About This Live Album By Banco Del Mutuo Soccorco?

Do you think this is their best live album or do you prefer one of the others?

What Are the Best Prog Rock Live Albums?

I have nominated Seguendo Le Tracce in my poll to find out the greatest live prog rock albums ever.

I don’t expect Banco to win it because so few people will have heard it but I do expect it to gain a few votes (like Solar Music Live) from those people who want to look beyond Yessongs and Seconds Out.