Pulse is a live album by Pink Floyd when they were promoting The Division Bell studio album. It was recorded in October 1994 released in 1995.

It raises some challenging views on what you want from a live album?

I think I’m going to upset a few people on this review although Pink Floyd are one of my favourite groups and I’ve owned nearly all their albums. 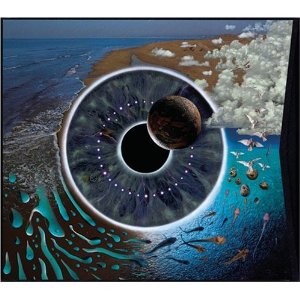 Pulse is notable for featuring a full length version of the classic Dark Side Of The Moon album along with highlights from Wish You Were Here and The Wall.

I have mixed feelings about playing all of Dark Side Of The Moon. On the one hand it is fascinating to see if the third version of Floyd can perform one of the most iconic albums ever recorded live in concert.

On the other, combined with the need to promote The Division Bell songs, it means that classic Floyd songs like Echoes and One Of These Days are excluded and there’s nothing from Animals, possibly my favourite Floyd studio album.

To be fair to the new songs, they stand up well although they are nothing like as familiar to my ears.

It’s great to hear them referring back to their start with Astronomy Domine but it would have been fantastic to hear a live version of Arnold Layne or See Emily Play.

These are minor grapes because I’d have been thrilled with this set list if I’d have seen them live on this tour.

Earlier I asked the question…

What do you want from a live album?

Note for note copies of the studio album with added crowd noise?

Or the group to play with the songs. Extend some? Shorten others? Create medleys that combine others?

Or a souvenir of the concert/tour that you saw?

Pulse does the last well.

This a professional performance from Floyd and the sound quality is excellent.

Dave Gilmour does a good job with the lead vocals and of course his guitar playing is good. I notice his playing more on Pulse than on the studio versions so I guess it’s slightly higher up in the mix.

The songs very similar to the studio versions. Slightly better in some places. Worse in others. I believe this is an opportunity missed. None of the songs played live have forged their own identity in my mind. I’d have loved to hear Floyd experiment with the songs but I guess they were concerned with criticism that they had lost it when Roger Waters left.

Floyd really only rock out during the encore on Comfortably Numb and Run Like Hell which both give Dave Gilmour a chance to show what an excellent guitarist he is.

Here are videos of Pink Floyd performing live in 1994.

Wish You Were Here

As you can see, when the visuals are added in, Pink Floyd were very dramatic when they performed live in 1994.

This section of my rating system is intended to look at topics like:

Is live a natural setting for the group or are they better in the studio?

How the group and crowd interact together?

Whether the recording is a pure record of what the fans who were there would have heard or if it’s been touched up by combining other live performance or in the studio?

Whether it’s one night/venue, multiple nights or multiple tours?

And whether the group is authentic?

This is Pink Floyd mark 3 with David Gilmour the dominant figure. (Mark 1 was Syd Barrett’s Pink Floyd, Mark 2 was dominated by Roger Waters).

Most of the songs featured were originally recorded by Pink Floyd Mark 2 but the group that performs on Pulse is after the acrimonious split and Waters is nowhere to be seen. While Gilmour and Wright may have been the dominant instrumentalists in both periods, Pulse just feels a little bit wrong to me. It’s also Floyd twenty years older than during their peak years.

I understand that Pulse has been touched up but not by going back into the studio. If the band didn’t like snippets of songs, they edited in parts from other recordings from the same tour where they did it better.

Floyd are a great studio band but live, the experience has always been about more than the music. A live album can’t capture the drama of a wall being built, the light show or the inflatable figures.

There’s also little interplay between the band and the audience apart from the applause at the end of the songs.

Pulse isn’t an embarrassment to Pink Floyd but I think it’s a long way from being the best Pink Floyd live album possible.

I also struggle to find a role for it in my record collection. When I want to listen to Floyd, I’m more likely to turn to Animals, Dark Side Of The Moon, Wish You Were Here or The Wall.

Even the compilation Echoes is more likely to get a play because it’s more representative of their entire career. This isn’t the case with great live albums from other groups that demand my attention ahead of the studio albums.

In my view Pulse is a good live album but I don’t think it’s a great one.

What Others Say About Pink Floyd Pulse

Plenty of other people disagree with me and love Pulse.

At the time of writing, Amazon.com has many five star reviews for Pulse.

As you will have gathered, there is also a DVD version of Pulse which gives you the important visual aspects of Pink Floyd playing live.

Other live albums by Pink Floyd are:

Ummagumma – one LP studio, one LP live featuring four tracks of their psychedelic space rock from their early days.

Is There Anybody Out There? – Mark 2 Floyd with Roger Waters playing the famous The Wall concerts. This live album was released to celebrate the 20th anniversary of the original album.

If you want to hear the real Pink Floyd (mark 2) innovating, you need to get a bit sneaky. The re-releases of Dark Side Of The Moon and Wish You Were Here is expanded forms have recordings of a concert from 1974. I have created my own Pink Floyd Live At Wembley 1974 album. The only song missing is the encore, Echoes.

What Do You Think About Pulse by Pink Floyd?

I’m very interested to hear your thoughts on Pulse.

Do you agree with me that Pulse is over-rated or do you believe that it is one of the best live albums ever?

Best Progressive Rock Live Album – do Pink Floyd deserve to be at the top or should that honour go to Genesis, Yes, ELP or another prog rock group.