Let’s take a step back to rare early seventies progressive rock with Gnidrolog Live 1972 which was recorded in my home town of Birmingham, UK.

The group is best known for the Lady Lake album which is a missing gem of British progressive rock. Think of them as a cross between Jethro Tull and Van Der Graaf Generator but with humour. 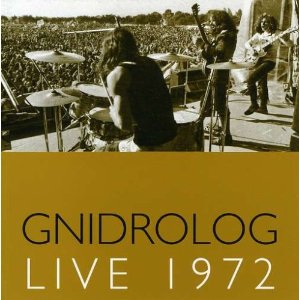 I don’t quite know what to make of the set list. On the one hand, I think it’s great that there are four new songs here. On the other, I’d have liked to have heard more of the Lady lake album live.

The problem with progressive rock bands is that sometimes the music loses something when it comes out of the studio. Other times it gains power like the Genesis Live album.

I suspect that this may be difficult to get because it seems to have gone out of print.

Please vote in this readers poll:

Click on the link to vote and to see the results so far.