All the World’s A Stage is the first live album by Canadian heavy progressive rock band Rush from 1976 concerts promoting their 2112 studio album. It was recorded at Massey Hall in Toronto, Canada.

This is a different sounding group than the one that appears on the second live album Exit Stage Left.

Rush All The World’s A Stage 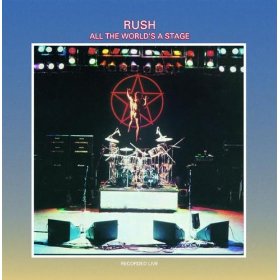 Rush had recorded four studio albums by this stage and All The World’s A Stage picks fairly evenly from all of them.

At this stage, they played guitar based, heavy progressive rock and songs like 2112 and By-Tor & the Snow Dog had multiple components. These lyrics were written by drummer Neil Peart around stories.

The members of Rush on this album are:

I will be writing a full review of this album.

Here are some videos of Rush performing in 1976.

This live album is highly regarded and does appear on the greatest live albums lists.

In particular, it is recommended by:

Buying All The World’s A Stage by Rush

What Do You Think About All The World’s A Stage?

Do you think this is a great live album?

Which of the Rush live albums do you think is the best?

This album is nominated in the polls to find the best heavy metal and prog rock live albums.

Because there are so many great hard rock live albums, I have a second division poll where you may find some of your favourites.