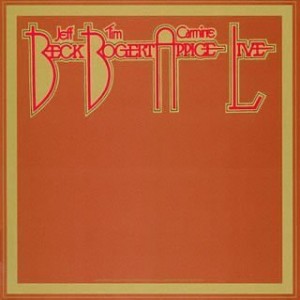 The only song missing from the Beck, Bogert & Appice studio is Oh To Love You.

This is a very demographic album. Those wanting lots of blistering guitar solos from Jeff Beck will be satisfied to some extent but might moan about too much space being given to Tim Bogert and Carmine Appice.

I like it and it also features the talk box guitar effect of making the guitar sound about to sing the lyrics. The group show plenty of promise and it’s a shame that they didn’t go on to make more albums. Tim Bogert’s vocals are satisfactory but the band may have benefited from having their own Roger Daltrey, Robert Plant or Ian Gillan.

This isn’t the easiest of albums to find at a good price so I recommend that you search around these websites and try Live and Live In Japan. I eventually gave in and paid the price to import it from Japan but I ummed and arrghed for a long time.

Is this live album a classic? Jeff Beck has a great reputation as a lead guitarist but is there enough evidence for rock and blues fans to justify such a reputation?

This is the only live album we have (so far) of Jeff Beck as a rocker since no archive albums have been released for the Jeff Beck Group with or without Rod Stewart.

I also have the blues rock live album poll