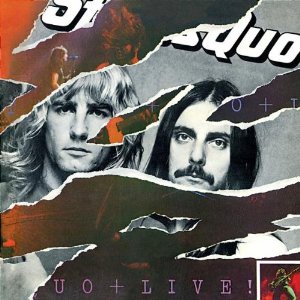 Because this is effectively the set list that I saw, I don’t mind the fact that earlier hits like Down Down and Paper Plane are missing or that it’s recorded before Quo recorded Rocking All Over The World and Whatever You Want.

CD2 is really terrific. Big Fat Mama was my favourite when I saw them and I’d never heard the song before. Caroline is Quo epitomised in one song. I’d bought a live version of Roll Over Lay Down and their covers of Roadhouse Blues and Bye Bye Johnny are a lot of fun.

Unfortunately CD1 isn’t so good. It establishes the chugga-chugga-chugga style of Status Quo which somehow makes you want to move your head up and down more than move your hips or tap your feet. I’ve no idea why. Unfortunately the songs aren’t as strong and casual fans may give up before they play CD2. That would be a waste.

There’s something about Status Quo and their simple boogie style which is very exciting when it works and dull when it doesn’t. Live captures them at peak form.

Some of the songs are extended by getting into the groove like a funk band rather than over-indulgent soloing like Led Zeppelin could do.

This CD captures the best known version of the band that recorded many of their seventies hits:

I don’t have a separate poll for Quo but they are a dominant band in the boogie rock poll.