In my opinion Bob Dylan At Budokan is an overlooked classic which is too often derided because he was experimenting with a very different sound on this album and the studio LP Street Legal. 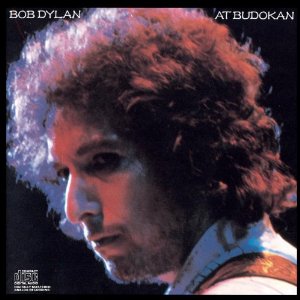 This is Bob Dylan with a Las Vegas style review with plenty of brass and female backing singers.

It is an album I often go back to when I want to hear some Dylan.

In my view, Bob Dylan had three peaks:

Live At Budokan pulls many of the great tracks from these three eras with a close to perfect set list and then gives some of the songs a dramatic overhaul.

This is what you get on the album

By 1978 Bob Dylan had an outstanding back catalogue of songs and while there will be favourites missing, I think this is a terrific list of songs. yes I’d have liked Tangled Up In Blue, Hurricane, Lay Lady Lay, Positively 4th Street and a few other early songs on it, I wouldn’t want to drop much.

Unfortunately he didn’t have a reputation like Bruce Springsteen for playing for 3 or 4 hours.

Purists will be shocked at what the Zimm does with his own songs but if anybody has the right to play around with these classics, it is Bob Dylan.

That’s partly what live albums and indeed live concerts are about. If I want to hear the studio version of a song, I’ll play the original LP.

As you read my reviews, you’ll learn that I’m a sucker for saxophone in particular and brass in general to liven up the guitar and keyboards sounds. There’s plenty here on this album.

And plenty of backing singers to round out the sound even more.

I think these arrangements put the emphasis more on the beautiful melodies and tunes that Dylan has written and less on the poetic lyrics.

The highlights? Well I like pretty much it everything on this album.

I want You with a flute playing in the background is so beautiful.

It’s Alright Mama I’m Only Bleeding is powerful and deserves to be played loud.

Shelter From The Storm is warmed by lovely sax playing.

You need to hear the album to truly appreciate just how different these versions are.

On the downside, I miss the traditional snarling aggression on Ballad Of A Thin Man and Like A Rolling Stone.

Many are shocked at what Bob Dylan has done on this album.

On the one hand, the originality in these versions and the variation from the studio albums is inspiring but…

It’s hardly the authentic Bob Dylan sound, either as a folkie or the leader of a dynamic rock band.

Personally I really like it but I also understand why some people reel away from Bob Dylan At Budokan.

Was Bob Dylan wrong to go electric in 1965 despite the controversy it created?

No he created some of the most highly rated albums ever.

And was he wrong to put his songs in a big band arrangement in 1978?

If you give At Budokan a chance and listen to it with an open mind I think you are going to be thrilled.

Dylan sounds happy playing with his band in 1978 and listening to At Budokan makes me happy.

Live 1966 and Live 1975 may be better live albums but I know that even since I bought those, At Budokan is the Dylan live album I play the most.

What Do Other People Say About Dylan Live At Budokan?

The critics choice seems to be between Live 1966, Before The Flood and Live 1975 so I haven’t found this album mentioned in any greatest live album lists… shame on them.

It does have plenty of 5 star ratings at Amazon.com so I’m not on my own for loving this album.

What Do You Think About At Budokan by Bob Dylan?

I’d like to know what you think about this album?

Are the critics right and Bob Dylan sold out to make money?

Or do you agree with me that this is a much-overlooked album that is outstanding?

Is it even the best live album by Bob Dylan

The two that are most relevant to Bob Dylan At Budokan are: