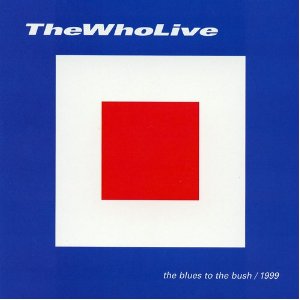 This is one of the best set lists from The Who live albums with five songs from Who’s Next together with some unusual songs like Anyway Anyhow Anywhere, Pure and Easy and After the Fire. Finally they move away from Tommy but if I was being really picky, I’d want more from Quadrophenia and something from The Who By Numbers which is much underappreciated. I’m giving the set list the full 10 out of 10.

The Who are in rip-roaring form on this album and Pete Townshend, Roger Daltrey and John Entwistle are very ably assisted by John “Rabbit” Bundrick on piano and other keyboards and Ringo’s son Zak Starkey on drums. Starkey is a much better replacement for Keith Moon than Kenney Jones but I still yearn for the crazy man to be bashing away. I’m giving the performance 9 out of 10.

As for atmosphere and authenticity, it sounds live in the way you want The Who to sound but Moon isn’t there and it’s twenty plus years too late. I’m giving a kind rating of 9 out of 10 since I’ve already penalised it for Moon’s absence.

It’s a very worthy follow up to Live At Leeds. My total rating is 28 out of 30 and it is my go to album when I want to hear The Who after their 1970 performances.

Here is a video of The Who performing My Wife at the Shepherds Bush Empire in 1999.

And because it is not performed very often, here is Pure And Easy from the same venue.

Buying The Who Blues To The Bush

This is hard to find but well worth the time searching.

What Do You Think About The Who Blues To The Bush?

I believe this is a great live album by The Who but I’d like to know what you think.

Please vote in my poll to find out the best live albums by The Who.

I realise that Live At Leeds is likely to be the runaway winner but I’m intrigued to know what will come second and third.

I have included it as one of The Who’s live albums in the best classic rock live album poll because of the inclusion of the CSI classics and others from Who’s Next and Quadrophenia. Live At Leeds is included in the hard rock poll because it shows the band as much heavier than their preceding albums The Who Sell Out and Tommy.

If you’re thinking that there’s a vital album by The Who missing, Live At Leeds is nominated in the Best Hard Rock Albums poll.

Because there are so many excellent hard rock live albums, I also have a second division album poll where albums can be promoted if they get enough votes.