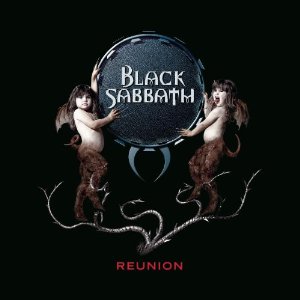 Black Sabbath are responsible for six classic heavy metal albums at the start of their career and this retrospective live album picked from the first five, ignoring anything from Sabotage.

I’m not a Black Sabbath expert but i wouldn’t have thought that fans could have any real complaint about this set list with all the essential Sabbath tracks although I’m sure personal favourites are missing.

Unfortunately when I listen to Reunion, I’m forced to face the fact that I’m not that much of a fan of the songs and for me, more is less. I give the set list 7/10 but I bet big fans will give it 10/10.

This album is relentless.

Screeching vocals with the lyrics belted out.

One problem is that the songs are performed in a very similar way to the studio albums.

The band sound tight and well rehearsed. Ozzy may have lost some of his highest notes but he’s not holding back. I can’t think of a word to describe the way he performs his vocals because it’s not singing.

Just as the songs, apart from the insistent riffs don’t appeal to me much, I fell I’m missing the popular appeal of Sabbath. I listen to this, admire the guitar work, bass and drums but the vocals and the sludgy tempos of the songs put me off.

Here are some videos of Black Sabbath performing live in 1997.

No doubt that this is the real Black Sabbath with Ozzy Osbourne back in the band. I rate Ian Gillan, Glenn Hughes and Ronnie James Dio as heavy rock singers but I don’t think any of them were right for the Sabs.

The next big plus is that Black Sabbath came home. This is recorded in Birmingham where they were born and where the band was formed.

The sound recording and mixing is excellent. Every instrument is loud and none dominates the others. Did I mention this was loud, no matter what the volume is set at?

The crowd are enthusiastic, even if Ozzy doesn’t think they are “f***ing loud enough” in places.

On the downside this was recorded in 1997 when nearly all the studio tracks played at the concert were from 1970 to 1973 so a Sabbath live record from the early to mid seventies would have featured the young Sabbath pioneering a brand new form of popular music.

I found the swearing in this album tiresome and gratuitous. Very middle class and British I know but I don’t see that it’s necessary or clever Just irritating.

Reunion is too much Sabbath for me.

When I put this album on, my head starts to hurt and I normally stop the torture before the end. or start later in the concert.

I thought much the same when I did see them live.

If you love Black Sabbath and heavy metal, then I think you’ll really like Reunion.

If you want to extend your album collection with a bit of Sabbath, you may be better with a studio album – Paranoid is the obvious one although Sabbath Bloody Sabbath is my personal favourite as it has more variety and (shock) synthesisers.

What Others Say About Black Sabbath Reunion

I think that’s because it was recorded 25 years too late.

On Amazon.com the reviews are very positive.

What Do You Think About Black Sabbath Reunion?

I’d like to know what you think about Reunion.

Is this the best that Black Sabbath has to offer live?

Why do you think Sabbath are better than Zeppelin, Deep Purple etc?

If you like Black Sabbath I think you’ll like AC/DC, Blue Oyster Cult, Deep Purple, Rush and Thin Lizzy.