Ted Nugent had been lead guitarist for the The Amboy Dukes before becoming the star attraction in that group and then going solo.

His first studio albums – Ted Nugent, Free For All and Cat Scratch Fever – were popular with heavy metal fans. 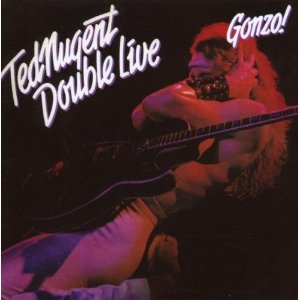 An interesting set list pulling together songs from Nugent’s past with The Amboy Dukes, his self named solo album and Cat Scratch Fever.

This is a very good summary of Ted Nugent’s career to date. It acknowledges his time with The Amboy Dukes with three songs, there are four songs from his debut solo album Ted Nugent and two from his third album, Cat Scratch Fever.

I will be writing a full review soon but I think this live album is terrific. High energy, extended versions of classic Nugent songs.

Here are some videos of Ted Nugent performing live in concert in 1976 and 1977.

Free For All (not on the album)

I think this is one of the finest examples of a hard rock live album and much more exciting to me than Led Zeppelin’s How The West Was Won, Black Sabbath Reunion and other albums by the super league of heavy metal groups.

If you want a Ted Nugent album from his classic period, then this is a great place to start.

What Others Say About Double Live Gonzo

It’s only appeared on one greatest live albums ever list that I’ve seen:

Ted Nugent has never been a critics’ favourite but the fans love what he does.

What Do You Think About Double Live Gonzo By Ted Nugent?

|If you’ve heard this album, I’d like to know what you think so please leave a comment.

Is it underrated and should appear much higher in the best live album lists?

Or is Ted Nugent a dinosaur who has no place in a good music collection?

Do you like all the album or is there a particular song that you adore?

Is this the best Ted Nugent live album?

To help find the best live albums, I use readers polls. I think you’ll be interested in these: