Exit Stage Left is the second live album by Rush after the success of their first,  All The World’s A Stage.

It was recorded at two concerts – June 10-11, 1980 at The Apollo, Glasgow, Scotland on the Permanent Waves tour and March 27, 1981 at The Forum, Montreal on the Moving Pictures tour.

This represents the peak time for the group as they changed their sound from the progressive heavy metal of All The World’s A Stage to a more classic rock style. They even started having hit singles with songs like Spirit Of the Radio and Tom Sawyer. 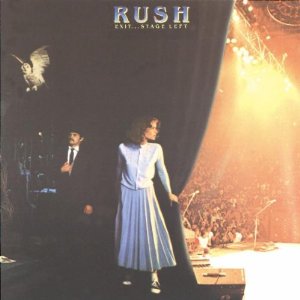 Two songs from A Farewell To Kings, two from Hemispheres, three from Permanent Waves and three from Moving Pictures, a couple of oldies (A Passage to Bangkok and Beneath, Between & Behind) and a short, not previously released track (Broon’s Bane) show that this is a well balanced live album.

It doesn’t duplicate any of the songs played on All The World’s A Stage.

I will be writing a full review for Exit Stage Left.

Closer To The Heart

What Others Say About Exit Stage Left by Rush

This album is very highly regarded and features on the best live albums ever lists.

The following ranked it very high:

Amazon reviewers are equally positive and consider Exit Stage Left to be a great live album.

What Do You Think About Exit Stage Left?

To help find the best live albums, I use readers polls.

Because there are so many great hard rock live albums, I have a second division poll where you may find more of your favourites.