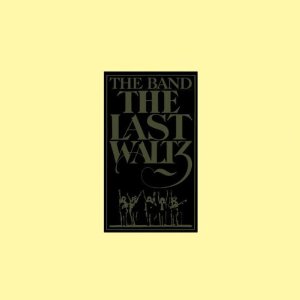 This is extensive and was first released as a triple LP and is now a 2 CD set. I’ve listed the famous guest stars against their particular tracks.

There’s an extended version of this album spread over four disks that includes extra songs.

It must have been a tremendous thrill to have been at the Winterland Ballroom in San Francisco on this night and to see so many big names perform.

Bob Dylan rightly has star billing as his connection with The Band is the most famous. If you’re after a Bob Dylan backed by The Band live album with songs from both of them, Before The Flood is the album for you. He also makes an appearance on Rock Of Ages.

Other big name stars that appear on The Last Waltz include Neil Young, Joni Mitchell, Neil Diamond and Eric Clapton.

If you’re a regular reader, you’ll know that I was going to struggle in this area.

Perhaps struggle is the wrong word. I do feel that The Band get lost within all the big name stars.

I’ve read that the album has been studio enhanced and resequenced.

Overall Rating For The Last Waltz

A very good rock concert and a historic event in classic rock.

It’s considered to be one of the best live albums ever by some. Not by me.

I guess it could have a role as the Desert island disks live album because of the variety on display.

It fails my “how often do I play it” test.

If I want to hear The Band, my fingers on my iPod flick to the first two studio albums Music From Big Pink and The Band and their first live album Rock Of Ages. I love all three of these albums.

What Other People Say About The Last Waltz

This album regularly appears in the best live albums lists:

Buying The Last Waltz by The Band

What Do You Think About The Last Waltz?

I’d like to know what you think about The Last Waltz so please leave me a comment. Do you agree with the many critics who love this album or do you side with me?