David Live by David Bowie was recorded on the Diamond Dogs tour in 1974 and marks the transition between the sci-fi glam rock of Ziggy Stardust and Aladdin Sane and the plastic soul of Young Americans.

I think it’s much better than its reputation. 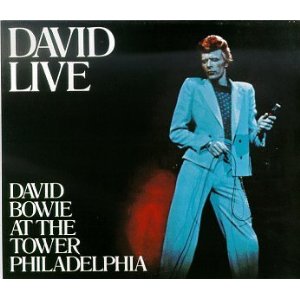 As you can see, the set list draws heavily on Aladdin Sane and Diamond Dogs with little from two of the most highly rated Bowie albums ever, Hunky Dory and The Rise and Fall Of Ziggy Stardust.

That’s a bit of a problem for me because when I want to hear David Bowie I tend to go before or after this period although when I listen to David Live, the songs sound good but not outstanding.

This is the thing about live albums and whether they are album focused or provide a summary of the best songs to date in an artists career.

I like a bit of both so I miss Starman, Life On Mars etc.

It sounds very quaint to hear David Bowie singing about 1984 as the future.

Bowie is quite a performer and I prefer the songs from Aladdin Sane and Diamond Dogs here than on the original albums.

Guiitar and sax dominate the sound and the group sound well rehearsed and tight to me. By the way, the guitarist was Earl Slick and not Mick Ronson and the sax player David Sanborn. I love sax in rock songs but others may find it off-putting.

Bowie’s singing has changed as he tries to emphasise the motion in the songs as part of his move to a more soulful sound and his voice is husky.

This performance of Bowie and his band has been criticised in the past but I think that may have been biased by a muddy sound that has been cleaned up with the latest releases.

Here are videos I’ve found on YouTube of David Bowie performing live in 1974.

Bowie had a confused identity at this stage. He’s lost his Ziggy Stardust persona and moved temporarily into the plastic soul of Young Americans before he progressed again.

If you’re planning to buy this album, be careful. People say the remastered version is much better and extra songs have been added from the original release. I noticed Amazon seem to be selling a number of different versions.

This was recorded in Bowie’s cocaine phase and he looks close to death on the cover?

There’s little live atmosphere apart from some muted cheering in the transitions between songs and no interaction with the crowd.

Muddied sound on the original recording has caused this album to earn a bad reputation.

I think it’s better than that and represents an interesting historical artefact as it represents Bowie in transition and shows how he got from Diamond Dogs to Young Americans. I prefer it to both of those studio albums.

I can’t believe that when I first reviewed this live album, I only gave it a rating of 21/30. Since then I’ve gone back to it time after time and the more you hear a great album, the more you love it. I’ve upgraded my rating to 26/30.

It’s highly recommended as the second Bowie live album to get but I know Bowie can do even better live. You should hear Live At The Nassau Colisseum..

What Others Say About David Live by David Bowie

It hasn’t received much recognition.

The only mention I’ve seen for it in greatest live album lists is from the Slate Readers Poll where it was rated 25th best.

I think this is because of its early bad reputation but I urge you to give it a chance.

Reviews on Amazon are generally positive.

What Do You Think About David Live By David Bowie?

I’d like to know what you think about this album.

Do you think it’s an overlooked classic or do you prefer the live Bowie of Ziggy, the Thin White Duke or the Berlin phase?

Is this the best David Bowie live album?