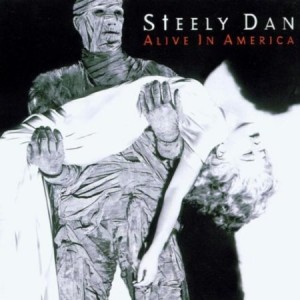 Two songs from Gaucho and three from both Aja and The Royal Scam means the set list is strongly biased to their late 1970s albums.I sometimes think that I’m the only person who isn’t convinced that Aja is brilliant but I prefer Can’t Buy A Thrill, Countdown to Ecstasy and The Royal Scam.

My bigger problem with the contents is that it is TOO SHORT. I’ve been expecting a deluxe version to be issued with more songs but nothing has changed since it was first released in 1995.

A quick check of setlist.com shows that there was much more available from their 1993 and 1994 tours. It includes more Becker and Fagen solo songs and I’d love to hear songs from The Nightfly played live.

Performance is excellent. If you’re hoping for exact replicas of the studio version, then you’re going to be disappointed and you should probably head towards a compilation. Fagen and Becker are happy to toy with their songs, just as you’d except from two highly skilled jazz-men.

Fagen’s voice holds up very well to the rigours of performing live on a tour, Becker sings his song Book Of Liars and shows that he should sing more as it is a nice contrast with the normal voice of Steely Dan.

The pair are assisted by:

Sound quality is excellent and I don’t think that’s caused by extensive touch-ups in the studio.

The weakest area is that there is little atmosphere with the crowd politely applauding at the end of the songs and no banter from Donald Fagen or Walter Becker. It’s also recorded too late. My perfect time would have been after The Royal Scam was released although they were not touring.

In conclusion, I think this is a very good live album but it’s not the brilliant one that I’d have hoped for. I want more songs (and more of my favourites) and more live album atmosphere.

It’s heading for a ranking of around 25 out of 30 (8 for the set list, 10 for performance and 7 for atmosphere and authenticity).

Is this a great live album? What do you like or dislike about it.

While Steely Dan were seen as extremely unusual when they first started releasing albums, their growing popularity throughout the 1970s means that I see this as a classic rock album. All their studio albums with the exception of Countdown To Ecstacy (which only managed a gold disc) have been platinum albums in the United States.