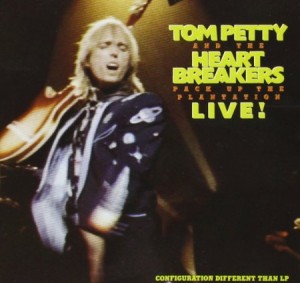 Songs On Tom Petty Pack Up the Plantation Live

These recordings come from the following sources:

I’ve recently changed my opinion of this album. When I first had it, I was disappointed and then I ignored it for years.

I’ve now gone back to it and I can see why others like it so much. I think part of my problem lies in the set list. For a concert album, it is too short at 71 minutes. By this stage, Tom Petty had written plenty of great songs and I wanted to hear them. Worse yet, of the 16 songs that appeared on the LP and cassette, two of them were dropped for the CD leaving this list above.

Then we have the problem that there are five cover versions on here. I want to hear Tom Petty originals performed live and while I like the odd cover version, 5 out of 14 is too many.

On the positive side, the performances are excellent and I get my much-loved saxophone, trumpet and trombone on the 1985 The Wiltern concert performances because the Soul Lips Horns appear, giving the songs additional depth.

The album therefore loses marks for the set list thanks to its shortness and proportion of covers to originals taking it down to 8/10. The performance rating is probably at the 10/10 level since it’s full of energy and we get those horns and Stevie Nicks.

The atmosphere and authenticity rating is an issue. There’s little interaction with the crowd although they are enthusiastic and pulling performances from so many concerts across a seven year period is an issue, knocking the album down to 7/10.

That gives this a 25/30 overall rating which is a recommendation to hear/buy but there’s a BUT.

This album is crying out for an extended reissue. In particular I’d love to hear the full Wiltern performance.

Is it the best live album by Tom Petty? Which do you recommend?

Please vote in the poll to find the best classic rock live albums. I thought Tom Petty would have had more support.