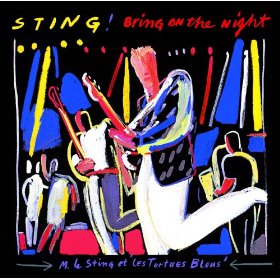 This is exactly what live albums should be about. Bringing together an excellent collection of songs, changing them, creating medleys and really adding to the creativity shown on the original studio albums. I’m glad Sting resisted the temptation to feature the big hits from his time with The Police because it helps to make the album feel more special.

The Dream of the Blue Turtles is the first solo album by Sting where he built on the jazz elements he showed in later albums by The Police. Besteveralbums.com rank it as the second best Sting solo album although it’s overall ranking just inside the top 1,500 is too low.

Sting gives the expert jazz musicians room to express themselves on much more accessible material.

I struggle to like jazz rock when there is too much formless, shapeless unmelodic instrumental noodling but this live album makes me want to investigate deeper into the genre.

Sting himself seems to sing better. I felt his voice was forced in various songs by The Police but he sounds more relaxed and less strained here and it’s kinder on my ears.

The recreation of The Police songs as jazz / jazz rock is masterful. There’s less adjustment to the songs from the solo album because the same musicians were used.

There are also two female backing singers to help round out the sound – Janice Pendarvis and Dolette McDonald.

Bring On The Night (from 1985 but not the album version)

I’d have preferred a single concert rather than a compilation from three different venues over a seven month period. What you gain in performance, you can lose in authenticity as this is no longer Sting on a great night.

It feels live but the audience is variably involved. Again I think this will be partly down to the different venues. There is very little interaction with the audiences which risks making it feel more clinical.

It’s unusual to release a live recording as the second album in a solo career but Sting was right to be very proud of what this group was doing.

I think 27/30 is a fair rating although I can imagine a time when I can’t stop playing it, in which case it would go up.

Do you agree with me and think that this is an excellent live album? If not, what’s wrong with it?

I must review his other live albums:

This is quite a hard album to classify but I’ve decided to include it in the poll of best classic rock live albums.

If you are interested in the results of the polls – and there has been quite a lot of voting in the popular polls – please click over to The Best Live Albums.