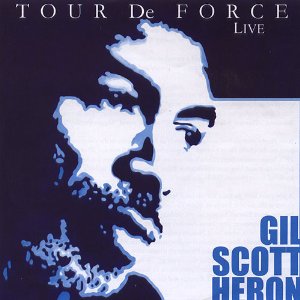 Let’s take a look at the different versions that exist of Tour De Force. I can only assume that Gil Scott Heron sold the recording rights to a number of different record labels.

Only seven songs and some of the chat taken away.

The Best Of Gil Scott-Heron Live

All thirteen songs but some of the chat has been edited out.

Gil Scott-Heron Save The Children

This has twelve of the thirteen tracks and incredibly excludes the song that is probably the biggest reason for Gil Scott-Heron fans to buy the album, the 23 minute version of Angel Dust. I can’t find times for the songs so I can’t give any guidance on the extent of editing.

Is That Jazz?
Gun
Save The Children
The Bottle
Winter In America
Blue Collar
Johannesburg
Three Miles Down
Washington D.C.
Shut ‘Em Down
Alien (Hold On To Your Dream)
B Movie

On this version, there are nine tracks. The track lengths are very similar to Tour De Force.

Missing are Angel Dust, Shut ’em Down, Alien (Hold On To Your Dream) and B Movie.

Eleven songs this time and the chat/songs are severely edited.

Missing are Angel Dust and The Bottle.

This is my favourite live album by Gil Scott-Heron because it has such a comprehensive set lit and the performances are strong. Again this is my go-to album when I want to hear the man and I only turn to the other recordings when I’m in the mood to go deep.

I have linked to the Amazon reviews for The Best Of Gil Scott-Heron Live rather than Tour De Force because they are better quality. It’s easy to get confused because the album covers are basically the same but buy Tour De Force.

You may find a bargain with one of the other released versions of this concert recording but my research indicates that you’ll make a big sacrifice on terms of lost music.