Aretha Live At Fillmore West is a live album by soul singer Aretha Franklin in concert in San Francisco over three nights in March 1971.

These concerts caught Aretha singing pop songs rather than her great soul classics from albums like I Never Loved a Man the Way I Love You and Lady Soul.

It has also been released in various versions. 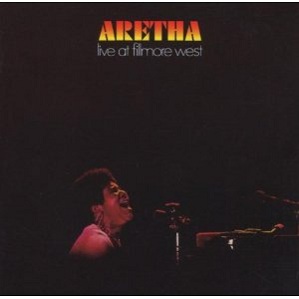 These are the same songs as the original release of the live album but they haven’t been edited down. In particular notice that this version of the reprise of Spirit In the Dark where Aretha Franklin was joined on stage by Ray Charles is ten minutes longer.

Disc 2 (Alternate versions from other nights and previously unreleased songs)

I find it difficult to look at this album and judge what is there and not wish for what is not there.

What Other People Say About Aretha Live At Fillmore West

Despite my misgivings, this live album regularly appears in the lists of best live albums ever recorded and released.

Reviews at Amazon are very positive as well.

What Do You Think About Aretha Live At Fillmore West?

Do you love or hate this live album by Aretha Franklin? Do you think it her best?

This album is nominated in the readers poll to discover the best live soul albums.

Does it deserve to be near the top?