I have a weakness for Joni Mitchell.

She’s part of my Sunday morning playlist when I want something mellow to listen to.

It’s therefore no surprise that I like Joni Mitchell’s live albums, Miles of Aisles & Shadow & Light and both were recorded in the greatest decade for music, the 70s.

This album comes from the Court & Spark album in March and August 1974 and captures her at her commercial peak. 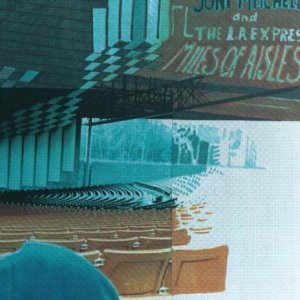 If you got excited about the idea of a live Joni Mitchell album from the Court & Spark tour, then you’re probably in shock when you look at the set list. No Help me or Free Man In Paris, just People’s Parties. Instead, we’ve got five songs from Blue, five from Ladies Of The Canyon and three from For The Roses.

It may seem crazy but it works beautifully although I’m left with a longing to have the full concert released because I can’t believe that she only played one song from her latest album.

The rating for the set list is docked one point, leaving a very solid 9/10.

If you’ve read some of my other reviews, you’ll know that I have an addiction to saxophone and songs are coloured by Tom Scott.

Here is a live video of Joni Mitchell performing Help Me live in 1974. It’s not on the album.

And Rainy Night House which is on Miles of Aisles.

This is where my live album bias comes through in trying to help people who want one of two Joni Mitchell live albums find the best choices.

Both Miles Of Ailes and Shadows & Light, her two prime period live albums are very atmospheric, have a good choice of songs and are sufficiently different to make a strong case for buying both.

The is a compilation called Hits, an ironical title, which is also very good.

Plenty of people also rave about her studio albums in the 1970s:

Blue and Court and Spark are probably the picks if you have to narrow it down to two. I have both but when I want to listen to Joni Michell, I turn to her live albums first.

Miles Of Aisles has featured in a number of the best live albums ever lists:

There are plenty of very positive reviews at Amazon as well.

What Do You Think About Miles Of Aisles?

What do you think? I’ve read that some people don’t think that Joni Mitchell comes over well live but I don’t agree.