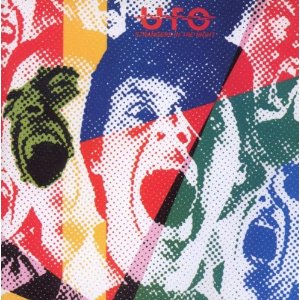 With the addition of the two bonus tracks to start the album, the running order has been re-jigged to more accurately reflect the set lists of the time.

I’m not sure why the group felt the need to add two studio recordings with fake crowd responses but I don’t notice any significant change in sound. Even with them , at 77 minutes long, it’s over far too quickly.

UFO don’t have a Stairway To Heaven, a Won’t Get Fooled Again or Smoke On The Water that has been overplayed on commercial radio so the entire album moves along very smoothly.

This album was recorded just before star guitarist Michael Schenker left so the group consisted of:

They sound terrific, giving the songs extra energy and dynamics while keeping the instrumental hysterics tightly reigned in. Star guitarist, Michael Schenker is occasionally let off the leash but his solos never outstay their welcome. I also appreciate what an underrated singer Phil Mogg was at this stage of his career.

When Michael Schenker discussed the Strangers In The Night album in an interview with Guitar Player Magazine, he expressed disappointment with the selection of the songs because he felt there were better ones available. If he’s right, it would have been an absolutely stunning album.

Too Hot To Handle

Let It Roll – there are a few minutes of interviews with UFO before the song starts.

Two studio tracks pretending to be live is naughty and cost the album a point. Another is deducted for the fact that it’s a compilation rather than a recording from one show.

This is a superb melodic hard rock album which is highly recommended to anyone who loves to rock.

That rating of 27 feels a bit stingy to me and I might be back to revise it when I’ve reviewed more hard rock albums. The cheating with those two studio tracks is suffering from my marking system because it sounds more like a 29/30 album.

There aren’t any pretensions here. UFO didn’t have a big reputation to protect. For some reason, success never reached them. Looking at Wikipedia and the highest positions in the album charts, their best up to this point was #23 with Light Out in America and #26 in the UK with Obsession.

I urge you not to make the same mistake and ignore this fantastic record.

What Other People Say About Strangers In The Night

This UFO live album is recognised as excellent and has appeared very high in several of the best live album lists. I don’t understand why it isn’t in more except that UFO have never been fashionable.

Buying Strangers In The Night

What Do You Think About Strangers In The Night?

Do you think it is the best UFO live album?

There are so many great hard rock live albums that I’ve created a second division poll where you may find more of your favourites.

I also think that Strangers In The Night has a strong enough focus on melody and the songs for it to be included in the more mainstream best classic rock live album poll.

If you like the melodic hard rock of UFO, then I think you’ll also enjoy Uriah Heep, Blue Oyster Cult, Deep Purple, Kiss