Made In Europe is a souvenir of the 1975 tour Deep Purple made with Ritchie Blackmore to promote their Stormbringer album.

Although there are only two personnel changes (vocalist Ian Glover and Roger Glover out, David Coverdale and Glenn Hughes in), this is a very different band than the one that recorded Made In Japan. 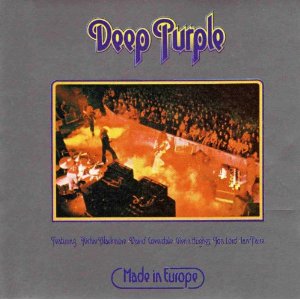 Made In Japan was a double album focusing on the Machine Head album while Made In Europe is a single album concentrating on the two Mark 3 Purple albums, Burn and Stormbringer.

I had this album when it first came out in 1976 and thought it nicely complemented Made In Japan without inviting direct comparisons between Mark II and Mark III on Smoke On The Water, Highway Star etc.

Since then it’s been superseded by other mark III live albums like Live In Paris 1975 and Live In London.

I like Deep Purple mark III and enjoy both their studio albums.

There’s an energy live that doesn’t come across from the studio recordings.

The performance is much better than you’d expect if Blackmore felt he was at breaking point. He’s got a reputation for being moody but his guitar blazes away with enthusiasm.

Burn, Mistreated, Lady Double Dealer and Stormbringer are all recommended. Blackmore obviously loved Mistreated as it became a core element of the Rainbow set list too.

Unfortunately You Fool No One puts me off. This is the track that’s been extended to let everyone have their solo opportunity but it seems to ramble along. It feels a long 17 minutes to me.

I find it difficult to think of mark II and mark II Deep Purple as the same band. I’d have preferred them to change the brand name but I can understand why they didn’t… money.

Allegedly this album has been extensively edited in the studio and even the crowd noises altered.

I have mixed views on it bit being the complete set. On the one hand I like my live albums to be as close to the concert as possible but I also like the fact that this is pure Mark III without inviting comparisons to the great band of Made In Japan.

Total Rating For Deep Purple Made In Europe – 21/30

This is a worthwhile live album but I can’t pretend that it’s essential.

If you want to hear Deep Purple and especially Ritchie Blackmore live, get Made In Japan. It’s rightly regarded as one of the greatest live albums ever.

If you want mark III Deep Purple live, there are other albums like Live In Paris 1975 that will give you the complete concert experience.

What Others Say About Deep Purple Made In Europe

I haven’t seen it in any of the best live album lists.

Feedback from the reviewers at Amazon is positive.

Buying Made In Europe

You can buy the album or hear mp3 samples at Amazon.com and Amazon.co.uk

What Do You Think About Made In Europe?

I’d like to know if you agree with me. It’s a good album but it’s not essential.

Is it one of the best live albums by Deep Purple?