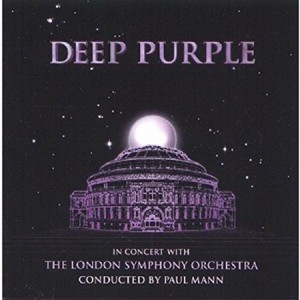 Songs On Deep Purple Live at the Royal Albert Hall

This is different from the normal Deep Purple revival live album thanks to the involvement of the orchestra on Jon Lord’s Concerto and a rock setlist that ignores many of the over-played classics from the early 1970s. Instead we get tributes to their solo work and features guest stars including Ronnie James Dio.

At this stage Deep Purple were Ian Gillan, Jon Lord, Roger Glover, Ian Paice and Steve Morse on lead guitar. Miller Anderson sings Pictured Within, Sam Brown sings Wait A While and Ronnie James Dio sings Sitting In A Dream and Love Is All. It’s then Ian Gillan from then on.

I’ve been a bit sniffy about many of the Deep Purple live albums after Mk IV but I have to applaud their ambition on this one because it’s like nothing you’ve from from Deep Purple before. The combination of group and orchestra is hard to balance but when it does work, it creates fascinating music. In some ways this is Deep Purple leaning back on their progressive rock roots.

Is it the best live album by Deep Purple? Which do you recommend?

If you like this album, I think you’ll also be interested in the best progressive rock live albums.