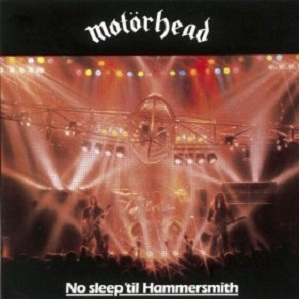 This live album comes in various different versions. I’d stay with the one without the extras because I think you’ll find a little bit of Motohead goes a long way.

Here are some videos of Motorhead performing live around this time.

What Other People Say About Motorhead No Sleep ‘Til Hammersmith

This Motorhead live album is recognised as one of the classics and has been included in the following best live album lists:

Buying No Sleep Til Hammersmith

It comes in various versions so be careful you know which version you want.

What Do You Think Of No Sleep Til Hammersmith?

Do you think this album deserves it’s outstanding reputation?

Do you think it is the best live album by Motorhead?

What Are the Best Heavy Metal and Hard Rock Live Albums?

No Sleep Til Hammersmith is nominated in my readers poll to find the best heavy metal live album. Vote if you think it deserves to be at the top of the list.