Kick Out The Jams was the debut album by punk pioneers MC5 and it was recorded live in Detroit in October 1968.

I always smile because I remember the time when I was at school and we were invited to bring in albums and play them. One of my heavy metal friends brought this and played the title track with its famous cry at the start “Kick out the jams, motherf***er1”

It caused quite a stir. 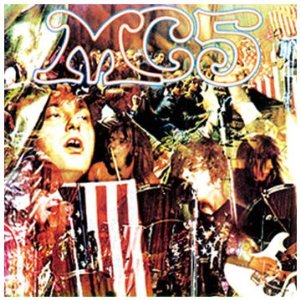 As this was the first album from MC5 I don’t have much to say about the choice of songs.

MC5 and this album in particular were often grouped with The Stooges as one of the major influences on the development of punk rock via the New York Dolls.

You can certainly see similarities with the rough and ready songs thrashed out in 1977 although MC5 were happy to extend their songs beyond the 3 minute mark.

I could do without the naughty bit at the start of Kick Out The Jams but it is the best tune. The video also starts with the motherf**ker word so you’ve been warned if you press play when anyone is around.

It’s certainly full on. Loud, fast, very heavy and it makes my head hurt to listen to it too much.

I think I need to toughen up if I’m going to keep writing these reviews.

MC5 were revolting. They were trying to launch an aggressive counter culture that was at odds with the peace and love hippy movement popular at the time.

The trouble is I feel the group rather lost its way in their anger and rage.

Kick Out The Jams has an immense live feel.

I can understand why some people love Kick Out The Jams but it doesn’t do it for me.

I hardly play it.

Maybe basic problem is that the songs aren’t good enough to play loud without making my head hurt.

What Other People Say About Kick Out The Jams by MC5

Most people say I am wrong about this album.

It is a regular in the high reaches of the best live album ever lists.

I don’t get why it is so esteemed but that’s the great thing about music.We don’t all share the same tastes.

Buying Kick Out The Jams

My view is don’t bother unless you like your music particular heavy and raucous.

What Do You Think About Kick Out The Jams?

Are the critics right and I’ve got it wrong? Let me know.

Kick Out The Jams is nominated in the readers poll to find the best hard rock and heavy metal live albums.