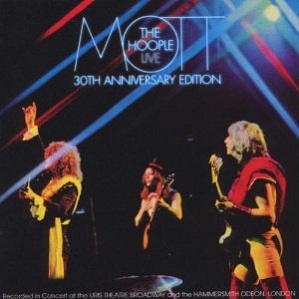 When I first heard this expanded version of Mott The Hoople Live I was very surprised how hard the band rocks.If you only know the hit singles, you could be in for a shock for you hear how raucous the band could be live.

Various punk rock stars have admitted that they were inspired by Mott The Hoople and listening to this live album, with its power and energy, you can understand why.

If you want a loss hard rocking live version of the well known Mott songs then I recommend Ian Hunter’s Welcome To The Club from 1979.

What People Say About Mott The Hoople Live

Is this the best of the Mott The Hoople live albums? Plenty have been released, both from the archives and from new recordings since the band reformed in 2009 and 2013.

Please help me to find the best live albums ever by voting in the readers polls: