If you want to know more about an album listed, if the writing is in blue, you can click on the link and you’ll go to another page on my blog.

Of course nothing could dislodge Live & Dangerous from the #1 position. While it may not be that we’ll known in North America, this is widely recognised in the UK as one of the very best live albums.

The extent of touch up in the studio is disputed although everyone admits this isn’t the raw live recording.  Despite that,  it brings together many of their best songs after the success of the Jailbreak and Johnny The Fox studio albums. Emerald and Still In Love With You are my favourites. It’s a great example of how twin lead guitarists can play together.

In second place is Life, their 1980s live compilation. 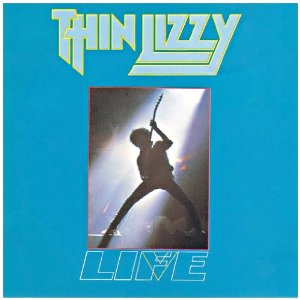 This misses the heavy “pop” sweet spot of Live & Dangerous.  This is hard rock but sadly the version I know is marred by poor production.

No other album is making much impression on the poll so far although there are other live albums with and without band leader Phil Lynott.

Like Little Feat, I struggle to accept the band after the main man died.

What do you think about the results? Do you believe that Live And Dangerous is over-rated or does it deserve to be one of the best live albums of all time?

What do you think are the greatest hard rock /  metal live albums? Does a Thin Lizzy live album deserve to be at the top of the list?

What are the best live albums by these rock groups?