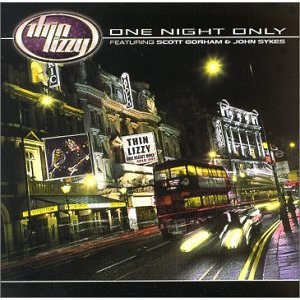 Songs On One Night Only

Jailbreak,
Waiting for an Alibi,
Don’t Believe a Word,
Cold Sweat,
The Sun Goes Down,
Are You Ready,
Bad Reputation,
Suicide,
Still in Love with You,
Cowboy Song,
The Boys Are Back in Town,
Rosalie,
Black Rose

The members of Thin Lizzy at this time were:

You can find out more about One Night Only at Amazon.com (including mp3 samples) and Amazon.co.uk . You can also try iTunes and eBay.