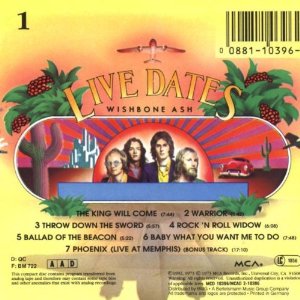 Live Dates includes four of the seven original songs on Argus – missing are Time Was, Sometime World and Leaf and Stream. Argus is a very good studio album but I think the songs are better on Live Dates.

It’s a great track but I’m puzzled about why they included two versions of Phoenix when it moved to CD. I’d have preferred the missing Argus songs.

The original band were still together at this stage:

Here are Wishbone Ash performing Warrior in 1973 live in concert.

What People Say About Live Dates

I’ve seen it in one best live albums list:

Feedback at Amazon is very positive.

What Do You Think About Live Dates?

Please help me to find the best live albums ever by voting in the readers polls.

If you enjoy guitar based music, you may also like these other live album polls: