Live Licks is a live album by The Rolling Stones from their 2002/3 and features Sheryl Crow and Solomon Burke as guest stars.

I had to buy this album when I saw that finally they’d played Can’t You Hear Me Knocking from Sticky Fingers. 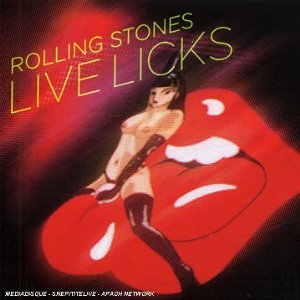 The album cover was censored in some countries by putting a bikini top on her… strange when you think about what’s going on in the photo!

By this stage, the Stones had become a classic rock act trotting out hits rather than a leading blues rock group.

An interesting set list with some unusual songs on it as well as some of the biggest Stones standards. The problem I have when I listen to it is that the album feels unbalanced and tails off.

After Can’t You Hear Me Knocking (I’d have loved a Mick Taylor and the Stones version), it goes into many of the lesser known songs when most gigs build to a climax. It’s good that they played and released their more unusual songs but I feel the order is wrong.

The Rolling Stones consisted of:

The bass guitar was played by Darryl Jones.

Here are some videos of The Rolling Stones performing live in 2003.

You Can’t Always Get What You Want

What Other People Say About Live Licks

What Do You Think About Live Licks?

Do you think this is a worthy live album by The Rolling Stones or another money-spinner?

Is this one of the best Rolling Stones live albums

The choice has got much harder with the release of the official bootlegs  but what do you think is the best live album by The Rolling Stones?