Free Live is a live album by the British blues rock group Free with Paul Rodgers as the singer and Paul Kossoff on guitar from concerts in 1970.

It was originally released with eight tracks and it has since been reissued with 15 including alternative versions of All Right Now, Mr Big and Get Where I Belong. 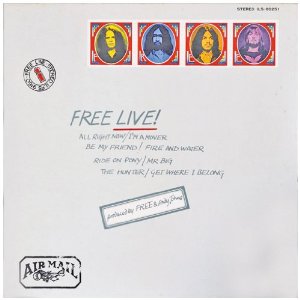 The reissue of this album is much stronger than the original although I could have done without the three tracks at the end being repeated. I can’t believe that there weren’t other songs recorded live by Free that could have been added.

The set pulls on the first four of the studio albums by Free.

My favourite ever Free song – Wishing Well – is missing which counts against the album when I decide what to play.

Free were different from many of the blues based rock bands that were popular in the late sixties and early seventies like Led Zeppelin. Somehow they made great use of space in a song that made their performances sound tight and intense.

I’m not a musician so I have no idea how this works but it does.

I’m biased because I prefer the rawness of live recordings but I think the songs sound much better on here than on the studio versions. Moonshine in particular has been much extended with a Kossoff guitar solo.

All four members are excellent and it’s hard to remember that they were so young and inexperienced. Paul Rodgers has one of THE great rock voices, raucous when needed, soft and tender when necessary. If you want to find a much under-rated vocalist, check out Jess Roden.

Great atmosphere from the group but I wish there weren’t two studio versions of Get Where I Belong. I’ve read that this was one of the last songs recorded by the group so the record company tagged it on at the end of this album.

I’ve also read that the crowd noise was dubbed on because of a recording mix-up. A live album without the crowd would sound wrong but it feels like cheating to add it on later from a different concert.

Listening to this album makes me wish that I had the chance to see Free. I caught Paul Rodger’s subsequent group, Bad Company when I was a student. They were slow to start but half way through really kicked into gear.

I suspect that Free were much better.

What Other People Say About Free Live

It used to be fashionable to say Free were fantastic and so much better than the stadium rock that Bad Company produced. These days Free seem to have been overlooked with the exception of their anthem All Right Now.

I haven’t seen Free Live in any of the lists of the greatest live albums except for Planet Rock ranking it at number 34..

Amazon reviewers are much more positive.

If you love blues rock live, then you really should hear this album.

What Do You Think About Free Live?

Do you think this is a great live album like I do?

You can get it from Amazon.co.uk or Amazon.com