Dig The New Breed is a live compilation album from The Jam featuring songs recorded at concerts between 1977 and 1982.

I remember the heady days back in 1977 and The Jam were caught up in the punk/new wave scene. It was a bit strange because their image and music was a long way from the Sex Pistols.

The developed into a very successful singles band with a series of number ones in the UK and created excellent albums including All Mod Cons and Setting Sons.

The Jam Dig The New Breed 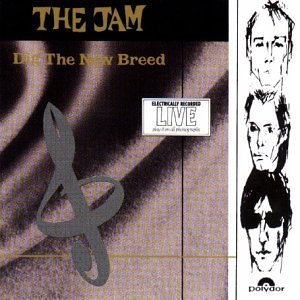 An interesting collection of songs ranging from classics like Going Underground and That’s Entertainment to four overlooked tracks from the All Mod Cons album.

Unfortunately for my tastes it is too short and misses too many of my “must hear” tracks by The Jam like Down In The Tube Station At Midnight, Strange Town and Eton Rifles.

Given that Dig The New Breed is a compilation from different sources, it could have been much better.

Pretty much exactly what you’d want The Jam to be like live.

If you’re read my previous reviews, you’ll know that I’m not very keen on live compilations. Better than no live album? Yes but I’d prefer them from one gig or one tour. For example it would be fascinating to hear separate albums for the All Mod Cons, Setting Sons and the final 1982 tours as the sound of The Jam changed significantly.

The Jam were an important group as the seventies turned into the eighties and as this was my University years, I’ve got fond memories of them.

I think part of the reason why there aren’t better established now is that their sound changed from the fast, fury of In The City through the more classic rock sounding All Mod Cons to Sound Affects albums and then the R&B influenced final songs.

What Other People Say About Dig The New Breed

It’s never been particularly fashionable to like The Jam although they were successful in the UK.

I haven’t seen the album feature in the lists of best live albums and there aren’t many reviews on Amazon.

What Do You Think About The Jam’s Live Album Dig The New Breed?

Is it the best of the live albums by The Jam?