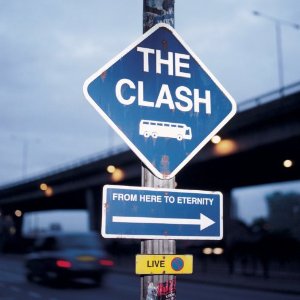 When I’m attributing albums to the songs on From Here To Eternity, I’m going with the versions issued in the UK. Their first album The Clash was released in the USA with various exceptional singles added – including Complete Control, White Man In Hammersmith Palais – but at the expense of some album tracks.

As you can see from the locations, there were quite a few concerts recorded and this album clocks in at just under 64 minutes. That’s not good enough for a live compilation in my opinion.

There are far too many great songs by The Clash that are missing from this live album including White Riot, their very first single.

This is where Live: Fro0m Here To Eternity picks up but in putting together any live compilation album, only the best versions of the songs should appear.

Here is a video of The Clash performing live.

I’ve got big issues with the thinking behind putting together From Here To Eternity. It is effectively a live “Best of The Clash” without all the best.

It’s not a record of a concert or even a reason impression. For example the songs are in roughly date order of when they were recorded. One of the joys of a great concert is the way that the artist or group moves backwards and forwards through their career.

Very disappointing. The world needs at least one great live album from The Clash, preferably two or three.

What Others Say About From Here To Eternity Live

It has been better received on the lists of greatest live albums than I would have expected.

The amazon reviewers love this live album by The Clash.

Buying The Clash From Here To Eternity

What Do You Think About This Live Album By The Clash

I have big reservations but I’d like to know what you think so please leave a comment.

What Are The Best Live Albums of All Time?

I have created a poll to find out what readers think are the best punk live albums and this live album by The Clash is nominated. Please take part.